Interview examines the connection between quantum physics and human consciousness. 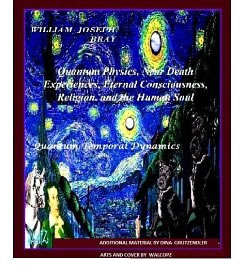 A few weeks back I had the pleasure and the privilege to sit in as a guest host for Skeptiko interviewing a very interesting guest, William Bray, author of the book  “Quantum Physics, Near Death Experiences, Eternal Consciousness, Religion, and the Human Soul” .  After the interview various Skeptiko listeners raised questions regarding W. Bray’s scientific credentials, considering that the book deals with various very specialized aspects of quantum mechanics. This type of inquiries (proof of tittle, peer-reviewed publications, etc) is very common and completely legitimate for those publishing books on science and making public claims.  So far William Bray has been unwilling to provide proof of his academic qualifications, or work-related credentials.
In the truly skeptical and impartial spirit of Skeptiko, I can no longer stand behind the claims of William Bray unless/until he’s able to verify these claims regarding his credentials.  — Enrique Vargas