Is the Bible a political con job? This scholar says the proof is right in front of us |289| 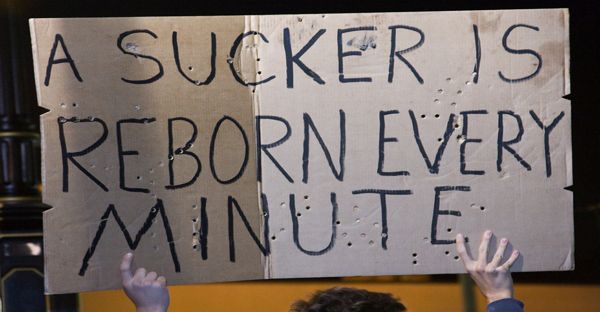 Biblical Scholar Joseph Atwill has forever changed how we understand early Christian history by focusing on religion as an instrument of political mind control.

A long time ago there was a war in the Middle East between the Romans and the Jews. Spoiler alert: the Romans won. After hauling the bounty back to Rome, and building a really nice arch, they had their official historian write it all down. The man they chose for the job was a Jewish general who not only switched sides to join the Romans in the sacking of Jerusalem, but proclaimed his Roman leader was the real Messiah the Jews had long waited for.

Now, a New Testament scholar has turned Christianity on its head by pointing out obvious connections between Josephus’ version of the Roman victory and passages in the Gospels attributed to Jesus.  Joseph Atwill has challenged New Testament scholars to explain how Josephus’ very pro-Roman version of events wound up becoming Jesus prophecies. Atwill insists we need to re-examine what we thought we knew about the ability of the Romans to rewrite history in order to consolidate power.

Alex Tsakiris: Some folks are put off by any mention of conspiracy in world politics. I’m not. Given the well-documented history of misdeeds by those in power I think it’s the perfect place to start. What is your general feeling about conspiracy and how it affects our worldview?

Joe Atwill: It’s all a conspiracy: 9-11; World War I; World War II. The most obvious conspiracy that we’ve suffered from was Constantine using Christianity as the foundation of the feudal system. This was clearly an insincere, conspiratorial, secret society moment where he developed the feudal system with a series of edicts and then also through an edict to Milan to start process of making Christianity a state religion so that the slave would think that there was a religious context for his condition…

The theory of Caesar’s Messiah is simply based on the sequence of these passages in the [Bible and the ancient Roman account of the Jewish war]. How much trouble is it for me to defend it? I just say — put the texts side-by-side. I told one scholar, how old is your son? Just read it to your son side by side and have him tell you if there is parallelism. Anyone can see it. It’s obvious…

If there’s one thing that comes out of Caesar’s Messiah that I hope occurs is that it will not only end the ability of the politicians to use Christianity as a propaganda tool but eventually it will force people to then put some sunlight into the Hebrew Bible and say, wait a second, what we’re looking at, tip to stern from Genesis all the way through the Book of Revelation is the literature of oligarchs. These stories are there to fool people into giving power to people that want to rule.

Click here for the full (2 hour) version of this interview

Alex Tsakiris: One of the real blocks atheists have is they’re so married to this idea that extended consciousness can’t possibly exist. They go through these mind-numbing apologetics to turn everything away from the obvious. The obvious is that when Constantine is going to sack Rome, this guy really is trying to connect with some spiritual wisdom to find out if he should go for war because there really is something out there. We don’t know what it is, but [the connection with this extended consciousness] does show up sometimes.

Joe Atwill: If someone excludes from their candidate list of possibilities, the world of spirit [they are not being] fully rational. However, I would point out when oligarchs claim to be in connection with gods or metaphysical forces, the citizen would really do well to be skeptical. And I would point out that historically the problem has not been that the populations have been immune to the oligarch’s claim that he’s connected to the metaphysics–to the world of spirit. It’s been that they weren’t suspicious; that he was just using the world of spirit as a false narrative to gain political power. And I would just point to the Vatican. It’s in my mind a secret society. It knows the truth about religion and its origin but it keeps that to itself because it enjoys the benefits of the power of religion.

Alex Tsakiris: The Gospel writers are putting [Josephus’ historical account] in the mouth of Jesus and they’re calling them prophecy. They are saying that Jesus came to the edge of Jerusalem and he prophesied about what was going to happen. This is something else that I think gets lost sometimes when people want to [criticize your theory by saying], well we already knew the Gospel writers were depending on Josephus…wait a minute, they weren’t writing history. They were supposedly writing the most divinely inspired prophecy of this leader of the church who foresaw something that was going to happen. If those guys were using as their crib notes a historical account than all bets off.

Joe Atwill: It shows that the theories developed from modern New Testament scholarship are way too complicated. And the much simpler, parsimonious explanation is that they’re writing these prophecies about the [Roman] military victories because it pleases the [Romans]. They’re taking a perspective of the victor.

Alex Tsakiris: The one part I can’t really get my arms around is how we treat Judaism in all of this.

Joe Atwill: It was a racist, xenophobic literature that came from, as I see it, the difficulties of maintaining an ethnic religion in a world where there was so much violence. If you go through the Hebrew Bible it’s just one military–

Alex Tsakiris: It’s crazy. It’s not monotheistic as it’s portrayed to be. From the beginning there are many gods. There’s this idea of sacrificing animals. The precursor to that was human sacrifice. That’s been established. Somehow in this process Judaism is elevated to some kind of status it just doesn’t deserve.

Joe Atwill: The religion is very primitive. It’s retained a canon that came from a period of time very early on and the problem of course–one thing I really like about Caesar’s Messiah is that gentiles have a really positive understanding of the Hebrew Bible because of the relationship it has to the Gospels. And so they actually see that the Jews are the chosen people. The principles of the Hebrew Bible that have been expanded and changed, and have become the story of Jesus Christ are given a stature that is inappropriate. Because in fact, if you look at the literature carefully it’s xenophobic, it’s racist, it promotes violence.

Alex Tsakiris: Its central character is this psychopathic, jealous god that reigns down horrible terror on people.

Joe Atwill: The literature, it’s pretty easy to understand–it’s mind control. You have the Jewish oligarch. He wants his foot soldier to walk out and defend his territory so he creates a story that God is on our side. Go out and do it. And then when they fail and get crushed the remaining foot soldiers come back and the oligarch says, you know why we lost? Because you were wicked.