Biologist, and noted telepathy researcher, Dr. Rupert Sheldrake is developing an automated telephone telepathy system and is looking for qualified interns to help. 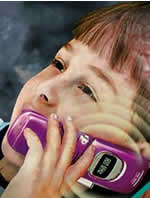 Despite the ever increasing pace of modern life many of us experience brief glimpses of a reality just beyond our grasp.  One such example is the experience of hearing the phone ring and having an unexplainable sense of knowing who is calling.  The phenomenon has been called telephone telepathy by Dr. Rupert Sheldrake.

Sheldrake, a former Fellow of Clare College, Cambridge and current director of the Perrott-Warrick project, has developed a automated system for testing the telephone telepathy phenomenon in the U.K. “The experiments we’ve run in Britain have yielded impressive results, but the new telephone telepathy system we’re developing will allow us to take these tests to the next level and further investigate this interesting phenomenon throughout the U.S. and Canada.”

Sheldrake continued, “We’re in need of talented people with technical and project management experience who can assist in bringing this web-based system to completion.  It’s a chance for someone to join a research project that has a chance to fundamentally change long held scientific beliefs about our connection to one and other… it’s very exciting.”

Alex Tsakiris: Welcome to Skeptiko where we explore controversial science with leading researchers, thinkers, and their critics. I’m your host, Alex Tsakiris, and on this episode of Skeptiko I have another brief update for you.

If you recall, on the last episode of Skeptiko, we talked a little bit about the Global Consciousness Project and how we’ve gotten involved with that a little bit. One of the other projects that regular listeners will know that we’ve been involved with for a long time is some of the research of Dr. Rupert Sheldrake. Now as many of you know, Dr. Sheldrake is a long-time friend of the Skeptiko show and was actually one of our first guests on Skeptiko and has been on a couple times since.

His research has been fascinating to me and I have always admired his clear thinking, his forthrightness and his willingness to, I guess, buck the critics. He’s certainly taken his share of criticism for really nothing else than just expressing unconventional ideas and as you know, that’s not the way science is supposed to work. So a couple years ago, I got involved with Dr. Sheldrake and tried to help with the Dogs That Know experiment.

I’ve updated you all a couple times on that; had some very limited success in finding dogs; kept after it for a long, long time. This may be the final update on this because I’ve kind of run into a brick wall. I’ve just had a very, very hard time making that experiment work. I put the word out a number of ways and I found people that were quite confident that their dog did this. They had some very good anecdotal evidence of it, but I was never able to quite close the loop in terms of getting people to follow through with the experiment, videotape their dog, record the times and log the times that they’re coming home with a cell phone, and just the whole procedure.

I’m really surprised. It doesn’t seem like that hard of an experiment, but after banging my head against the wall for a pretty long time with a bunch of people, and sending laptops here and there all around the country to try and get people to do it, it just became more effort than it was worth. I have to report that I have some here and there, scattered evidence of it, but I don’t have that stellar dog that I would like to put forward as the dog we can go into testing with and prove the phenomena once and for all.

So I definitely think that dog is out there, and if you know that dog, or if you care for that dog, let me know. I might be willing to pick up the ball again on that. Otherwise, I have to back off on the Dogs That Know experiment and say I wasn’t able to help move that forward.

Now in the process of working on that experiment, I had a chance to correspond with Dr. Sheldrake many times over the last year or two. I have found him to be a very busy guy, but a very open guy, and very willing to support other people getting involved in his research. For that reason, I most recently have picked up on another project that he’s been involved with, and that’s the Telephone Telepathy experiment. I’m in the very beginning stages of trying to help Dr. Sheldrake put together a Web site that would automate the process of telephone telepathy testing. (That’s a tongue-twister.)

Here is where I’m putting a call out to any Skeptiko listeners out there who have talents in Web site development, in particular PHP programming, database programming, that kind of stuff. We could really, really use some help in creating what could be a very exciting platform to further this research and further prove telephone telepathy. So if you have that skill set and you might have some time to help us on this, you’ll receive a great deal of praise and fame. You’ll be famous. You just might help move this science forward. So if you do have those skills, please let me know. Write me an e-mail, alex@skeptiko.com, and just reference what we’re talking about here and I’ll be sure to get back in touch with you.

Okay, so I said this was going to be a short update and it turned out to be one. That’s really all I wanted to say. I have one more update to do. It might be a little bit more interesting. Then we’ll get on to some very, very new and exciting shows that I have coming up for you – some interviews. I’m going to put those out really soon.

So thanks for checking in with me on this one. Again, if you’d like to connect with me, visit the Skeptiko Web site, skeptiko.com. You’ll find a link to me, my Facebook, my Twitter, and an e-mail link to me. That’s going to do it for today. Until next time, bye for now.