The Dalai Lama is loved by millions, so why is this science professor demanding he step down? |270| 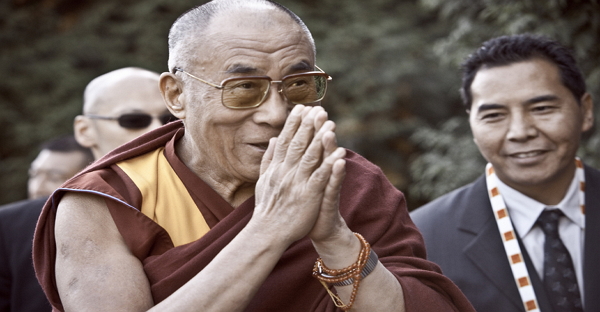 ASU science Professor Lawrence Krauss stepped into his own black hole when he challenged the Dalai Lama’s over his belief in reincarnation.

A strange clash of science and religion.

Alex Tsakiris of Skeptiko interviews theoretical physicist Dr. Lawrence Krauss about whether reincarnation is nonsense and why the Dalai Lama should step down.

Join Skeptiko host Alex Tsakiris for an interview with Dr. Lawrence Krauss, author of A Universe From Nothing. During the interview Professor Krauss discusses his film “The Unbelievers”, and his call for the Dalai Lama to resign:

Lawrence Krauss: One of the many aspects [of Buddhism] that is completely ridiculous is [this person] who claims to be a reasonable man, and tries to be in accord with science, the Dalai Lama. His whole position is based on something that is absolutely ridiculous. If he really believed in what he said; if he really put his money where his mouth is, he would resign as Dalai Lama because the Dalai Lama is based on reincarnation which is just nonsense.

Lawrence Krauss: It is nonsense.

Alex Tsakiris: But I just talked to Jim Tucker, respected psychologist in the department of Psychology and Psychiatry at the University of Virginia. They’ve done extensive work published in the best journals in their field, and they offer the only explanation for what they found in terms of reincarnation… I think you would really have to tell me specifically what is wrong with–back to science–what’s wrong with the scientific method they’ve employed?

Additional excerpts from the interview are available below and a complete audio version of the show is available here and on youtube.com/skeptiko.

Alex Tsakiris: Now there we go again. That’s exactly what we’re talking about. There isn’t any standard other than the method of science and what science has in place. Peer review is supposed to take care of that. It’s supposed to bring the people on the fringe either in, and they get published, or they don’t. We don’t need this meta-rule; meta-analysis. When I talk to folks and they say, “Extraordinary claims require extraordinary proof,” how is that scientific? It’s not. What we have works, we just have to apply it. We don’t need someone at the end of the football game saying “Oh no, you didn’t win by enough. You have to kick another field goal. That’s not quite an extraordinary victory.”

Lawrence Krauss: If you’re going to make an extraordinary claim in science that means you’re in some sense contradicting–generally an extraordinary claim is contradicting generally accepted wisdom which is based on the evidence. So you’re saying the conventional ideas and theories are wrong. And if you’re going to make that claim then you’ve got to have a darn good reason to make it. Most of the time people make that claim. And I get those letters everyday from people who say, “All of physics is wrong and I’ll tell you why…”

Alex Tsakiris: But are they publishing in top-notch journals of physics? I think if they are you do have to pay attention to it because that’s the way the game is played.

Lawrence Krauss: Yeah but you also have to be skeptical of stuff in top-notch journals.

Lawrence Krauss: But as you said, it’s a process. But I do believe that extraordinary claims do require extraordinary evidence. Science is often done by baby steps but if you’re claiming a scientific revolution, which most–when someone is claiming to make a revolutionary result you can be pretty well certain most of the time that they’re not.

Professor Krauss rebukes the concept of reincarnation and calls for the Dalai Lama to step down–[16min.51sec-19min.37sec]

Lawrence Krauss: One of the many aspects [of Buddhism] that is someone who claims to be a reasonable man and tries to be in accord with science. His whole position is based on something that is absolutely ridiculous. If you really believed in what he said; if he really put his money where his mouth is, he would resign as Dalai Lama because the Dalai Lama is based on reincarnation which is just nonsense.

Lawrence Krauss: It is nonsense.

Alex Tsakiris: We have a group of people, and I didn’t get a chance to talk to Dr. Ian Stevenson from the University of Virginia because he’s passed away. But I just talked to Jim Tucker, respected psychologist in the department of Psychology & Psychiatry at the University of Virginia. They’ve done extensive work published in the best journals in their field. I don’t know how anyone could criticize what they’ve done. And they offer the only explanation for what they found in terms of reincarnation.

Lawrence Krauss: There are more people alive today than there have been in the sum of human history up to about 100 years ago so I don’t know where the souls–

Alex Tsakiris: But that’s a different question isn’t it?

Lawrence Krauss: What you can do is ask yourself the following: I guide myself by the mantra if you wish, speaking of Buddhism, of the editor of the New York Times, he said “I’d like to keep an open mind but not so open that my brains fall out.”

Alex Tsakiris: Well my wife heard that when she was in Bible school.

Lawrence Krauss: Everything I know about science to argue that reincarnation is likely… Look, in science we can’t say that’s something impossible per se, certain things we can perhaps if they’re well tested, but what we can say is that they’re extremely unlikely. It’s likely versus unlikely. It’s extremely unlikely there’s a God. Just as it’s extremely unlikely there’s a teapot orbiting Jupiter. It’s extremely unlikely from the same point of view of every bit of science that I know of, including the evidence of logic as well as empiricism that reincarnation occurs. Certainly from a physics perspective there’s no mechanism; from a perspective of just counting numbers much less of a perspective of the fact there’s no evidence–any evidentiary existence for something you might call a soul. That’s all grand speculation which doesn’t have any basis in evidence and so therefore as a scientist I’m incredibly skeptical about it. So, that’s what I mean by nonsense. There’s no–it’s just as likely that reincarnation exists to me as there is the likelihood there’s a teapot orbiting Jupiter. Now I can’t prove there isn’t.

Alex gives his closing comments about Dr. Krauss and his indictment of the Dalai Lama and how that’s reflective of a broader arrogance in mainstream science.

Alex Tsakiris: One push back I anticipate from this interview is folks saying, “Dr. Krauss doesn’t really represent mainstream science. He’s on the edge, has an extreme position.” But I have to disagree. Certainly there are not many professors at a major state university that would call for the Dalai Lama to step down. That is extreme. But I think science as we know it, the institution of science, loves when Dr. Krauss steps out there and says these kind of things. He’s the barking dog on the chain that keeps everyone in line. It’s just like when Richard Dawkins says, “I don’t despise religious people, I despise what they stand for.”

So, don’t expect any outcry from science groups admonishing Dr. Krauss for remarks that many will find, offensive, insensitive… and from a scientific standpoint, unsubstantiated… but we won’t go there. And don’t expect an outcry, because you haven’t heard it, about Richard Dawkins’ comments.  Even though they open the door to hate any group that you don’t like.  Oh I take it back — we don’t hate them; we hate what they stand for. Science falls in line with these ideas because they’ve been conditioned to think it supports this phony battle between science and religion that occupies so much of our time. I am very glad Dr. Krauss came on Skeptiko and shared these ideas because I think they are representative of science-as-we-know-it…

Let me offer up a couple of questions from this interview:

Question 1: Is reincarnation nonsense? And I ask that question from a scientific standpoint. How would we approach the question of reincarnation? It’s a widely held belief. Many people have a belief in it not just by birth, but an actual experience of it… i.e. memories, recollections of previous lives. How would we explore such a question scientifically?

Question 2: How can your life have any meaning if you live in a meaningless universe? I’ve asked this question to many atheists and skeptics and I never seem to get an answer. And I don’t think I got an answer from Dr. Krauss either. This is simple logic: if the entire universe is meaningless then how is it possible that your life has any real meaning? Of course you can pretend that your life has meaning, but it’s inside of a universe that has no meaning. How is that possible?

And finally, I’d offer up one answer to Dr. Krauss’ question of how can reincarnation exist if there’s more people on the planet now than ever before? The answer is, I don’t know because we haven’t investigated how reincarnation might work. And what is the nature of consciousness that might exist outside the body? When I was listening to Dr. Krauss and his ramblings on extraordinary claims and extraordinary proof, I couldn’t help but remember a recent interview I did with radio host, Tim Binnall and his excellent reworking of that phrase: “Extraordinary claims require extraordinary investigations.” I think Tim’s got it right on the money.