234. Global Warming, Climate Change and Our Illusion of Control 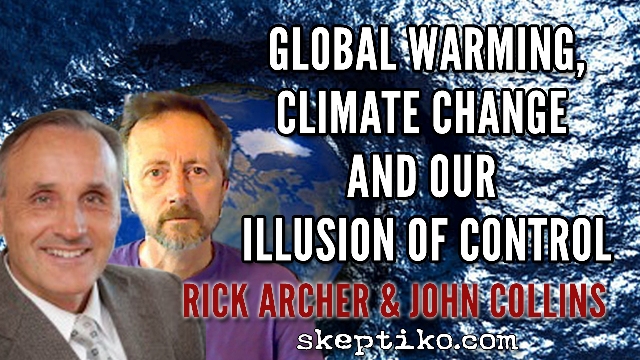 Interview with the Rick Archer host of Buddha at the Gas Pump, and John Collins from Maharishi University reveals controversy over the spiritual implications of global warming.

Join Skeptiko host Alex Tsakiris for an interview on Global Warming, science and spirituality with Rick Archer from Buddha at the Gas Pump and John Collins from Maharishi University.  During the interview the group discusses some common misconceptions about global warming and how our desire to maintain an illusion of control over climate leads to doomed-to-fail policy decisions.  The group also has a lively debate on some of the accepted truths of Climate Change:

Rick Archer:  John, could you comment on one thing? You know, we always bat around this comment that 90% of all professional climatologists agree that global warming is real and manmade. I think you started to say that a minute ago and Alex said, “Oh, come on.” Is that true?

Alex Tsakiris:  Google the presentation by Dr. Judith Curry at Georgia Tech University, a highly-regarded, world-renowned climatologist, and she’ll pull that apart for you. She’ll show you how it’s true on one level and on another level it’s completely misleading because the answer depends on how you ask questions and what kind of questions you ask.

What she’ll tell you is while most climatologists  agree there is some manmade pressures to the global warming the oversimplified, oh just don’t worry boys, science has got it all worked out kind of thing falls victim to exactly what we saw in Climategate.

Rick Archer:  Can one of you explain to me what Climategate is? I’ve heard the term but I forget what it refers to.

John Collins:  Some people hacked into the East Anglia University climate unit in 2009. It was just before the Copenhagen Climate Summit. They grabbed about 1,000 emails basically from about four climatologists there. Most of them are extremely boring but there are a few which sort of suggested they were trying to smooth out the wrinkles in their model. They were indeed disappointed about the point that Alex is making. They didn’t understand and they weren’t able to explain why the warming trend had leveled off since the year 2000.

Alex Tsakiris:  That is your spin on Climategate, John? That you lead off with that they were hacked into, when the best guess suggests that those emails were leaked by whistleblowers who were inside it and were just outraged by how these scientists had done an end-run on science? And they were systematically trying to undermine peer-reviewed papers, were systematically trying to misinform the media with a story about global warming continuing to rise. And where they had manipulated data. They had ignored large amounts of data from Russia because it didn’t fit their model.

So I think this is a classic example, I think, of how the issues are broader than science. We have to be very careful and we have to be discerning about who we listen to in these debates.

John Collins:  Right. And of course, the manipulation goes very much on both sides of the table.

Alex Tsakiris:  Of course it does.

(there is no transcript of this interview)